We have come to the end of our year as your Team Captains. Here is our report on the year and how it has gone!

The following is what we agree to be the remit of the Team Captains:

We ran partnering this year with Kerry's involvement. We were successful in pairing up 16 beginner couples, 8 novice couples and 10 preinter/inter/advanced couples, though we had a big shortage of leaders in Intermediate partnering.

This took place on Saturday 30th October - here is the original event info. This was attended by several beginner and novice couples, and we filmed and published all of the talking and explaining. This year, Helen helped with the hair and makeup workshop and we kept the entire event within the Guild unlike in previous years.

We attended the IVDA and NUDA meetings on Sunday 24th October at Aston University. We voted for role-switching between leader and follower to be allowed in unrestricted events, as well as approving the introduction of ex-student Intermediate as a new category.

At the meeting, we were offered use of the in-development competition entry and scrutineering system, eScrut. This is being developed by IVDA and we were offered the use of it for Birmingham Friendly and accepted.

We voted for Durham to host NUDC - they were the only team to submit a bid. We attended NUDC on Sunday 13th February in Peterlee, Co. Durham, and attended IVDC on Saturday 26th February in Blackpool.

Planning for this event originally started in June 2020 and Katie and I put plans into action very soon after our election. We got the Great Hall booked in early through the UoBe festival team, as our event coincided with the end of the festival. We originally instructed three judges - Gary Foster, Ronald Jager and Morgan Hemphill, and were able to replace our initial scrutineer, Kris Turner, with James Moore from IVDA, having been offered use of the eScrut system. We then engaged an additional two judges - Richard Rose and Leila Stewart. Richard Rose unfortunately had to cancel, so we engaged Jamie Cutler as a last-minute replacement.

Compering responsibilities were shared by our two coaches, Kevin and Kerry, as well as James Cardus. We decided to order trophies for the first places in the 27 main events, and I organised a team of marshalls to help on the day on the front desk, to assist the officials and to prepare and fetch refreshments and meals, along with arranging for a team of runners to fetch marks.

One of our judges cancelled last-minute so we ran the event with 4 judges. We had 18 universities attend with a total of 195 entries and 316 unique individuals after dropouts on the day. We sold over 60 advance spectator tickets with over 100 sold on the day, and we ran to time thanks to everyone's help!

Katie did most of the work on choreography with help from Ellie - myself and Katie both arranged the music. The theme was 'The Greatest Show' - a medley set to the soundtrack of the Greatest Showman.

Teaching started early in first term but was not well attended until second term. We competed Offbeat at IVDC with 18 people, placing sixth in spite of there being an issue with the music for our team only (that's why you should never go first!)

This was an initiative by Katie and was taught by Katie and Ellie, focusing on dance-specific fitness and training. It was well attended in first term but in second term the sessions ended up being taken by Offbeat rehearsals due to needing to catch up on the routine.

We attended the following competitions:

We were very proud to have finalists in every comp!

Katie: My major aim was successfully running Offbeat and Birmingham competition as have been planning them for two years, lovely to be back, and it was been a pleasure to work with Richard, thank you to everyone.

Rich: Through two years on committee I had always aimed to make dance that bit less scary and inaccessible, and I feel I have managed to achieve that. It's been great to work with and be supported by so many people and to give back to the society, but it is now time to move on to new challenges, whatever they may be! 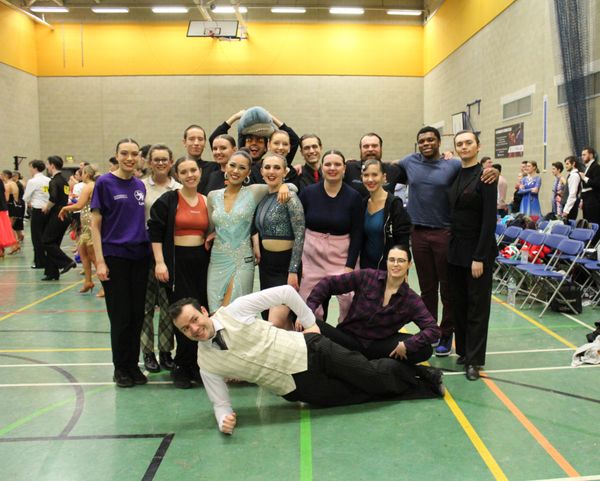 Our last competition of the term and as a committee! Bristol as always hosted a fantastic comp with and we were proud to bring a big team afte~