I left off the last part of this article saying I'd talk about Blackpool next and I will, however after publishing that part I slept on it and realised I'd missed a few things I thought were important to mention, so I'll cover that first. I should also warn you that I have no focus in this article at all. I think it's almost entirely tangents.

First, dance shoes made a lot more of a difference that I though they would and thanks for Richard for lending me his spare pair which I'm starting to doubt will ever get returned. I'll have to buy a new pair to return or something.

Second, Kevin's lessons are so hard to follow for someone new to the society. Perhaps they're a lot easier if you've been there for the whole year and they've become easier to follow as I've found my feet however those first few I attended were difficult and frustrating. I had no chance of getting off the starting line let alone actually keeping up. Had I not put in the time in practice I wouldn't have actually learnt anything. Kevin seems like a great coach however as a newcomer I found the pace of everything much too much to deal with.

By comparison, Kerry's lessons were much more fundamental and easier to learn from. Especially with how she actually helps each person in the lesson rather than trying to do it all at once. Admittedly since she started teaching at the society around when I joined I was technically around from the beginning and that was definitely a big help to my understanding of latin, so which I can't fairly compare my experiences with the two coaches I have to say I found Kerry's lessons much less demoralising.

The last thing I wanted to stress a bit more was the sense of frustration and the demoralising nature of the pre-Blackpool practices as a newcomer. Being in a position where you know enough to realise how much you could be learning and not having any resources open to you to learn is irritating. Seeing everyone else, already competent and making some degree of progress each session is downright frustrating when you feel stuck in place. Again, I don't hold this against anyone but I want to stress that being directionless, out of my depth and feeling so very out of place was probably the hardest hurdle I faced trying to properly join this society. I should once again thank Jenny for the encouragement she gave me when the frustration almost got too much, which shamefully happened more than once and I'll get to that later.

With that more properly addressed, onto the my main topic - Blackpool.

I'm not sure what possessed me to ask to get onto this trip at the last second and my thanks to the old committee for letting me get away with that because I think this had a bit of a domino effect on the rest of my time in BALADS so far.

The coach ride there was mostly uneventful. I took a stab at the quiz with Sinéad and Lauren but as you might expect, I wasn't much help and any jokes in it went straight over my head.

Once we arrived and started to settle in I got my first taste of the weather that weekend on the walk some of us took to the beach and then the society at large got their first real introduction to me, courtesy of  Magic Marc XXL. While just a joke at the time and a pretty funny one if you ask me, I think this was one of the things that set me up for success later down the line.

There isn't much to say of how I found the first bit of the Blackpool trip since it was mostly just throwing my stuff in a room and going to sleep. The first real day of the trip however was an experience.

Entering the Empress for the first time was remarkable. Both in terms of the atmosphere that was created in the bustle of the teams as they got everything in order and in terms of the size and appearance of the venue. It was around this time that I realised what my job would be for the day; staying out of people way as best I could. The place being so crowded definitely took some getting used to and trying to stay out of people's way in the aisles while also being able to see the dancing was more difficult than I'd have guessed.

So began my long watch, with the beginners waltz. I made an effort to try and watch at least one of each dance in beginner but I confess I didn't bother beyond that, the dancing in the main hall was frankly more interesting to watch, since I couldn't really learn anything from watching any of the categories at that point due to my inexperience.

Boredom was absolutely a big problem, funnily enough going to a big dance competition and then not dancing is a dull thing to do. As excited as I tried to be for people when they made rounds it was a pretty fleeting set of congratulations and then back to the monotony. On the upside the massive amount of downtime I had lead me to end up talking with members of the society I hadn't before.

It got to the point where I was very glad when I was handed a camera and asked to video people from the society just to give myself something to focus on for the second half of ballroom. I doubt I filmed anything particularly well, sorry about that, but it did help me cling on to my sanity a bit.

It was also here that I got my first hints of being more of a latin leaning dancer rather than a ballroom one, which was unexpected. I found the ballroom portion of the day very dull and this is in part due to a lack of understanding and appreciation for the skill and technique on display but also I find ballroom lacks the energy that was present in the latin half of the day.

It was a nice injection of energy at that later point in the day, as it's hard to be so close to a Cha-Cha or a Jive and not feel at least some of the bounce and cheer from the floor.

What really made me prefer the latin portion of the day was the ex-student advanced rounds. The first one I saw left me genuinely speechless. Even a layperson like myself could clearly see just how good every couple on the floor were and even among then some couples stood out very clearly to me, Péter and Megan for example.

I didn't even know people could move like they did but if I hadn't been sold on getting good and competing before those first heats, I was afterwards. I doubt I'll ever reach that sort of level but it's something to aim for.

The rest of the day continued on as you might expect, long periods of not doing very much interspersed with a few moments of excitement. I did learn that I am an idiot though. I managed to go almost the entire day without eating or drinking anything after I left the hotel. Not entirely sure how that managed to slip my mind but it shouldn't be a surprise I ended up in a bit of a funk by the end of the day without really realising it. Partly from how long the day was, partly from feeling a sense of separation with everyone else as a spectator who didn't really get what was going on in the same way as the rest of you, a sort of ultimate third wheel. Perhaps not the most rational reaction but my reaction nonetheless.

Once again, my thanks to Jenny for managing to bring my spirits back up before team match started, which allowed me to enjoy it much more than I would have otherwise. Getting to do team match with Xavia was the highlight of the day. Sure I may have not known what steps I was meant to do or been able to do them but it was so much fun just to be able to step out onto the floor and dance after being envious of everyone else doing it. walking off the floor that time was probably the first time I genuinely felt like I was a real part of the society and not just some sort of hanger on.

I then ducked out of the venue early because someone reminded me eating was a thing so I did that and made my way back to the hotel. I don't really remember much of the night out that happened. Not because I was massively drunk but more because my memories of that time are entirely dominated by the small incident which happened afterwards; getting locked out my hotel at 3:00 in the morning.

As it happened Marc had taken our only key back to the hotel, gone into the hotel and then basically passed out and didn't show any signs of waking back up. I arrived back first, and loitered outside just barely sheltered from the rain for a bit until Rose realised what was going on and brought me inside the other hotel and made sure I was at least dry and warm while she and a few others tried to sort out what was going on. Can't say how grateful I am for that though I imagine I tried and failed to at the time.

We eventually managed to get back into the hotel through waking up the owner at about 5:00 and I felt really awful about it but he was remarkably chill about it all. Very funny in hindsight, less so at the time but it'll be a fun story to tell to newcomers.

The second day was much less eventful but a lot more fun. I felt more comfortable around the society all of a sudden. The tea dance was a nice experience, just calm relaxed fun and I was actually able to dance, which was a nice change from the day before where not being able to dance was a major source of frustration. My thanks to Jenny and Siyu for dancing with me during that event.

After that was the buffet and then killing time for a while until the coach arrived for the journey back, which had it's own issues. Losing our driver at the service station was certainly a new experience to me but I found all the road works and delays to be quite nice; people always get more talkative when journeys start being inconvenient.

That's all I had to say about Blackpool, though I feel most of what I've said is entirely unrelated to it. With any luck in the next and final part of this article I'll talk about how things changed after Blackpool, up to the end of term. 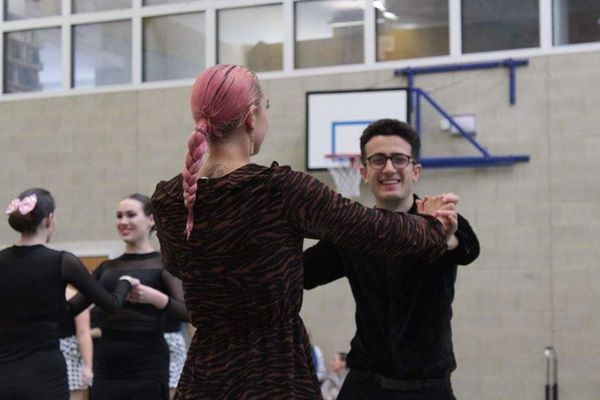 Note before reading: Kerris has provided me with a list of the restrictions that I did not have before writing this post. I have strongly suggested buying patterned clothes, and

I've been doing Ballroom and Latin for about four years. I started during the second year of my undergraduate and I've been with BALADS for the past two years, since I moved to Birmingham. When I started out I thought I was pretty hopeless